Zip lining, snorkelling and fun in the sun in Vanuatu 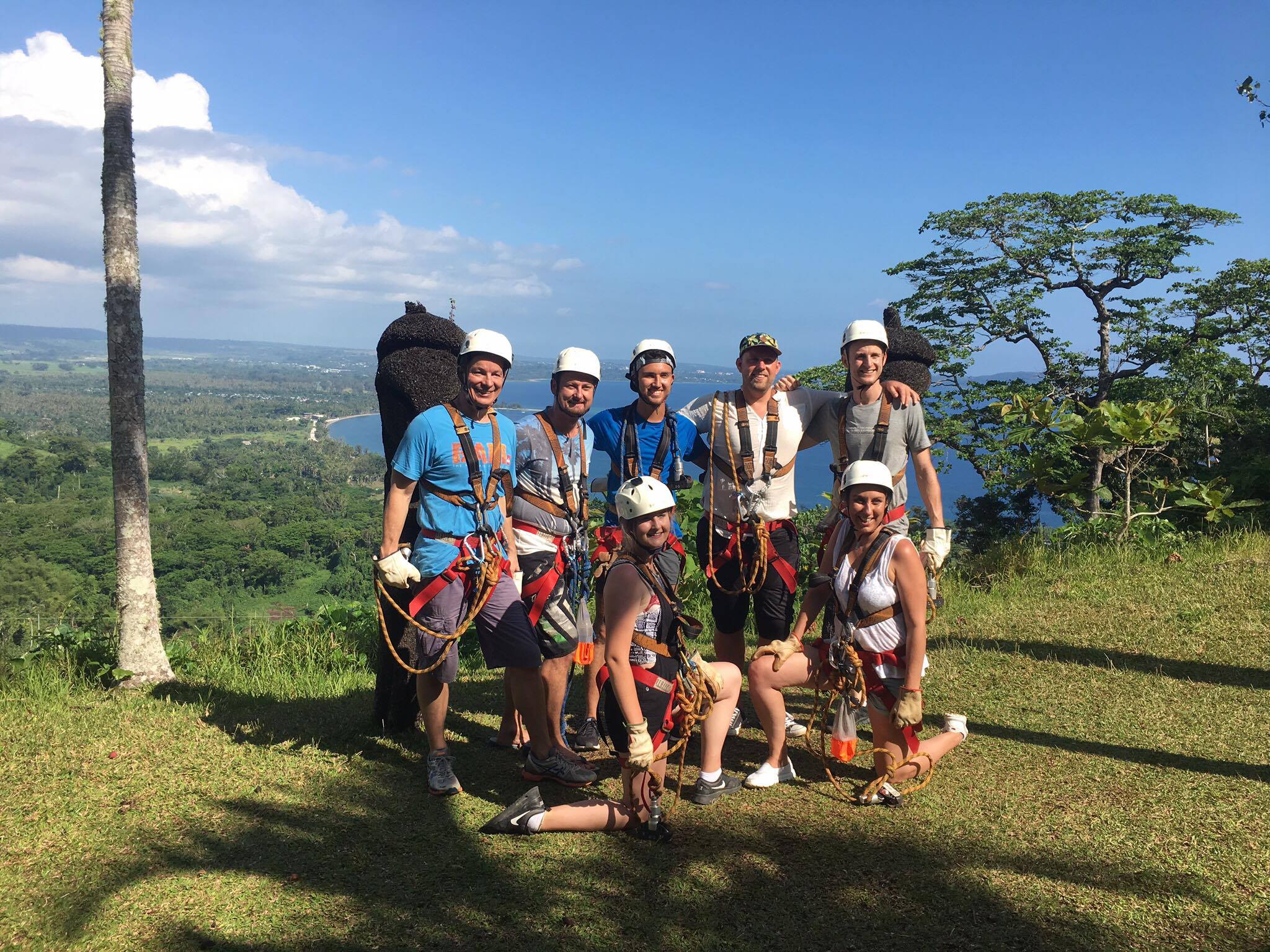 The 2016 face to face fundraising competition winners from Australia and New Zealand, came together in November to Port Vila for a relaxing and insightful trip. We checked into our resort late in the night and the next morning we were woken to the sound of waves gently crashing into the shore at our own private beach! For the first two days of the trip, we swam, canoed to a small island, drank cocktails from coconuts and enjoyed a beautiful dinner provided by Cornucopia at the Lava Lounge.

One of the highlights of the leisure activities was the zip-lining throughout the beautiful jungle scenery at Mele, about 20 minutes open bus ride from Port Vila. All buckled up in our harnesses and safety gear, our guides led us to the first line, high up in the trees. The fundraisers took the first zip line with a little caution, but by the third line, the acrobatic monkey moves were on display! Half of the crew spent the Sunday diving in some amazing spots around Efate island and surfing later in the afternoon. Others spent time by the pool, lapping up the pool side service and enjoying a dip in the private beach.

Vanuatu is a land of beautiful beaches, warm and friendly people and lot’s of coconuts. It is also a place that is regularly visited cyclones, the most recent being Cyclone Pam in 2015. A year and half after the cyclone ripped through the islands of Vanuatu, you could still see the repairs and building works in the capital Port Vila and throughout the villages that we visited on the main island, Efate.

The F2F fundraisers work hard throughout the year, connecting the donors with the cause and Cornucopia’s yearly face to face fundraiser incentive trips connect a lucky bunch of fundraisers to connect with some of the beneficiaries. It is inspiring to be able to see how the Red Cross is working with local village leaders to assist the communities where they need it most.

Kevin, from the Vanuatu Red Cross  was our guide for the next two days. Kevin has been working with the Red Cross in disaster response and management for over 10 years and came from a construction background. Up early on the Monday morning, we hired a bus with Kevin and drove to the other end of Efate, ready to jump on a banana boat, for a 30 minute ride across to the island of Moso. The island of Moso has two villages and we visited both on this 32 degree (Celsius) day. The Vanuatu Red Cross were working with the local people on two key areas; the WASH program (water, sanitation and hygiene) and rainwater harvesting. There is no running water on the island and the people there rely on rain and bore water (see the well in the image below – image that this is where you get your water from!). Recently, Vanuatu Red Cross had worked with the local people to build and install rainwater tanks to assist in the safe storing of water. After saying our thanks and farewells to the people at the first village, the face to face fundrasiers then started on the hours trek to the other side of island in the peak heat and humidity of the day. Each day the children from the first village do this trek to get to school – there are no roads or transport on the island – and walk back again. We were informed by Kevin that there had not been much rain lately which meant there were days when the school had to stay closed as they did not have enough water for the children. Luckily, today was a day when the school was open and children could sing, dance and learn. The principal welcomed us with a warm speech and the children sang one of their favourite songs – One, Two, Three Little Turtles – and of course, the fundraising canvassers sang some pop songs for the children.

After a boat ride back to the main island, we traveled back on the bus to another village, where we visited a school that had been affected by Cyclone Pam. The verandas and roofs of the buildings were literally blown away. Vanuatu Red Cross worked with the school and local builders to repair and rebuild the damaged areas of the school. The teachers we meet were so thankful of the quick repairs which meant they could get back to doing what they do best – teach and inspire the next generation.

The next day, the fundraisers took to the bus again, with Kevin and visited the Vanuatu Red Cross office. We were shown the emergency response centre and the warehouse. If another disaster was to strike, the Red Cross are ready to move into action at anytime and provide life saving resources.

The Vanuatu Red Cross is also helping young women in Vanuatu to become more financially independent by teaching them business skills and providing them with the tools necessary to build their business in horticulture or textiles. To assist, the fundraisers we joined the Red Cross and visited nearly every village on Efate, travelling across the entire island to deliver the tools needed for their businesses.

The trip was a great insight into the programs delivered by the Vanuatu Red Cross and provided a great opportunity for the fundraisers to get to know some of the many beneficiaries that are supported by amazing donors all over the world. Definitely a favourite place and cannot wait to visit Vanuatu again soon!

MORE INSPIRING STORIES FROM THE FIELD

Any cookies that may not be particularly necessary for the website to function and is used specifically to collect user personal data via analytics, ads, other embedded contents are termed as non-necessary cookies. It is mandatory to procure user consent prior to running these cookies on your website.